Explosives can be used in the following ways: Weaponised or demolition.

In this short manuscript we will instruct you on how to make weapons grade explosives. But first, let’s look at the mechanics of an explosive device such as a mine or a grenade. You may view the explosive force within a device (when triggered) as a massive build up of gas. The housing of the explosion will expand to its maximum and then just as gas it will exit the housing through the path of least resistance. This is pure physics…weaponised physics! Nonetheless, any explosive device is created to expel that lethal energy in the form of flack/shrapnel and a shockwave. When a device explodes it will not create a fireball or an inferno unless it is thermic or incendiary. Most explosives used on the field is made to kill, cripple or disable. Unfortunately, there is a lot of false information out there concerning explosives. You will not need T.N.T or Plastique in order to make or use explosives as weapons grade field tools. Many people overlook gunpowder/black powder. This can be found quite easily in firework explosives that you can purchase anywhere in most countries, and the good thing is, is that that same firework can very easily kill a person if slight adjustments are made – this is what your Government does not want you to know!

To create a Grenade is extremely simple, this is what you will need: 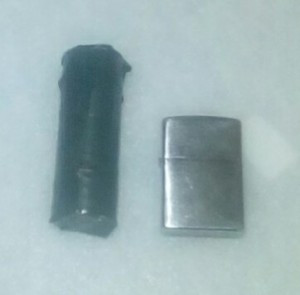 A word of warning: It is illegal to own and make any explosive device without the appropriate licence/permits. Use this information in cases of Emergency only!

To create a Mine is equally as simple:

You will require three firework explosives and all other material given above except for the lighter. You will also need cardboard, a box of matches and an old pot/can etc.

There are numerous variants of mines, so it simply depends on how you wish to deploy them. “Tamping” an explosive is simply directing the explosive charge, I.E which direction the killing blast will go: up, down, to the right or the left. With mines and demolition charges, tamping will be required. 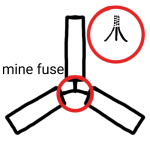 Once you have made your three grenades for the use of a mine you will Tamp them as follows:

When the match trigger is stepped upon, the match will drag against the striker and in turn the fuse will combust. The steel pot/can etc will serve as the tamping which will send the explosive force upwards at a 90 degree angle. The cardboard funnel just serves to keep dirt and damp from interfering with the mine.

See above legalities. Use in cases of emergency only!